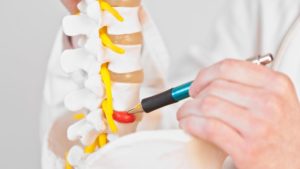 While herniated, slipped, and ruptured discs are synonymous with one another, a bulging disc is a whole other thing.  Before we get into the differences between herniations and bulges, though, what exactly is an intervertebral disc?

Intervertebral Discs in a Nutshell

Or should I say… donut-shell!  By looking at the picture below, you can see why intervertebral discs are often compared to jelly donuts! 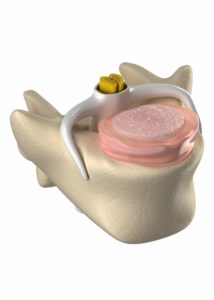 An intervertebral disc is the protective cushioning between the vertebrae of your spine.  The structure is composed of a fibrous outer layer made of tough cartilage, and a gel-like core made of soft cartilage.  The main functions of the discs include movement of adjoining vertebral bodies, shock absorption, and nerve protection.

Intervertebral discs will, over time, lose fluid.  When the center of a disc dehydrates and the surrounding cartilage stiffens, the circumference of the outer layer swells up.  If the effects of the water loss only impact the disc’s outer layer, it is a bulging disc.

A herniated disc involves the jelly-like center of the disc.  If the gel slips through a crack in its fibrous exterior casing, the disc becomes herniated (aka slipped and ruptured).  Keep in mind, though, the whole disc doesn’t actually slip or rupture.  Only the small crack is affected.

Aside from an aging spine, other reasons for disc injuries include poor posture, improper body mechanics, and high body mass.

Signs of a Disc Injury

As was mentioned in a previous article about spondylosis, we’re all destined to have some degree of intervertebral disc degeneration by the age of 65.  The good news is that it doesn’t always present symptoms, with some people never knowing they have disc problems unless they have spinal imaging done.

With that said, here are some of the signs to be aware of if you think you may have a herniated or bulging disc:

Herniated discs are more likely to cause symptoms than bulging discs.  This is due to the herniated disc protruding and pressing into spinal nerves.  Pain, tingling, and weakness are all common symptoms of a pinched nerve.

While direct manual pressure to the spine is contraindicated, massaging the surrounding muscular tissues can ease the symptoms of a herniated or bulging disc.  In addition to relieving the discomfort, massage can also increase the chances of the disc healing on its own without invasive measures.  Massage benefits such as restored joint range of motion, improved circulation, and lengthened muscular tissue all help to stabilize the area of disc bulge or herniation, which encourages the disc to move back into place.

The ideal massage for someone with a disc injury is a full-body myofascial approach to reduce pulling on the spine.  Fascial restrictions compress the spine and hold it out of alignment, which can both cause and worsen disc problems.

With a disc injury, you might want to avoid trigger point therapy, as it may intensify pressure and inflammation on the discs.

Attaining and maintaining flexibility is key to disc injury recovery.  Be sure to do gentle back stretches on a regular basis to keep the affected disc stabilized.  The best time to stretch is right after a therapeutic massage session!

Also consider heat and ice therapy as part of your treatment plan.  Start with 15 minutes of heat application to loosen the muscles surrounding the disc, which will reduce pain and spasming in the area.  Then follow up with 15 minutes of cold application to reduce the inflammation.  Try to do that 2-4 times a day!  And if you have epsom salts at home, try a warm bath to ease the discs!

There is hope for your herniated and bulging discs!  Get them on the right track to recovery with bodywork!